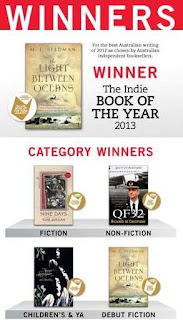 Tonight at Berkelouw Bookstore, Paddington, the independent booksellers of Australia announced The Light Between Oceans by M.L. Stedman as their favourite Australian book from last year and the winner of The Indie Book of the Year Award 2013. The individual category winners in Fiction, Debut Fiction, Non-Fiction and Children’s & YA were also announced. From these four category winners the independent booksellers selected the best of the best - The Indie Book of the Year for 2013.
Voted on by the independent booksellers of Australia, the Indie Book Awards have a proud tradition of picking the best in Australian writing. All of the previous winners (Breath by Tim Winton, Jasper Jones by Craig Sylvie, The Happiest Refugee by Anh Do, All That I Am by Anna Funder) have gone on to win other major literary awards.
M. L. Stedman was born and raised in Western Australia, and now lives in London. The Light Between Oceans is her first novel, and so far has been translated into nearly thirty languages. It is a bestselling book around the world, including Australia, Italy, Denmark and America, where it reached No. 4 on The New York Times hardback fiction list. Recently it was long-listed in the UK for the prestigious Women’s Prize for Fiction (previously known as the Orange Prize).
'I love bookshops. Nothing can replace the authority, experience and passion of the independent bookseller, and this year I've had the privilege of confirming that view not just from my usual reader perspective, but, for the first time, as an author.  Whilst every Indie bookshop is different, they share a distinctive DNA around the world: an understanding of individual tastes, an obsession with the life-enhancing power of the written word, and a delight in matchmaking readers and books they'll fall in love with.' M L Stedman, The Light Between Oceans
The category award winners were also announced:
BEST FICTION:
Nine Days by Toni Jordan (Text)
BEST NON-FICTION:
QF32 by Richard de Crespigny (Pan Macmillan)
BEST DEBUT FICTION:
The Light Between Oceans by M.L. Stedman (Random House)
BEST CHILDREN’S & YA BOOK:
Sea Hearts by Margo Lanagan (Allen & Unwin)
I would never have had the opportunity to write Nine Days without the support that Independent Bookstores have given me over the course of my career. The encouragement they provide to new Australian authors is irreplaceable. Without Independent Bookstores to nurture and engage readers, our vibrant, distinctively Australian voices and stories might well be lost. Tony Jordan, Nine Days
It's an honour to have QF32 shortlisted for the Indie Award.   Just as much as my passengers trust and enjoy the services and experience that comes with a value added airline, so I value the Independent Booksellers that remain a vital and essential part of our community.   Thank-you for your wonderful championing of my story. QF32 would not have been a success without your support!Richard De Crespigny, QF32
Independent booksellers do what all booksellers should: you know your books and you know your customers, and you match the one to the other with skill and enthusiasm. You ARE word of mouth, the most important factor in any book's success. Margo Lanagan, Sea Hearts
Posted by thesaurusbookstore at 5:52 PM