All the Light We Cannot See 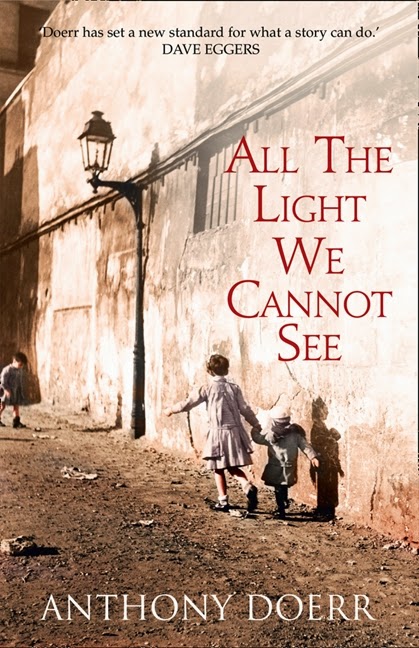 From the highly acclaimed, multiple award-winning Anthony Doerr, a stunningly ambitious and beautiful novel about a blind French girl and a German boy whose paths collide in occupied France as both try to survive the devastation of World War II.

Marie Laure lives with her father in Paris within walking distance of the Museum of Natural History where he works as the master of the locks (there are thousands of locks in the museum). When she is six, she goes blind, and her father builds her a model of their neighborhood, every house, every manhole, so she can memorize it with her fingers and navigate the real streets with her feet and cane. When the Germans occupy Paris, father and daughter flee to Saint-Malo on the Brittany coast, where Marie-Laure's agoraphobic great uncle lives in a tall, narrow house by the sea wall.

In another world in Germany, an orphan boy, Werner, grows up with his younger sister, Jutta, both enchanted by a crude radio Werner finds. He becomes a master at building and fixing radios, a talent that wins him a place at an elite and brutal military academy and, ultimately, makes him a highly specialized tracker of the Resistance. Werner travels through the heart of Hitler Youth to the far-flung outskirts of Russia, and finally into Saint-Malo, where his path converges with Marie-Laure.

Doerr's gorgeous combination of soaring imagination with observation is electric. Deftly interweaving the lives of Marie-Laure and Werner, Doerr illuminates the ways, against all odds, people try to be good to one another. Ten years in the writing, All the Light We Cannot See is his most ambitious and dazzling work

Melanie rated it 5 of 5 stars
I always thought, or imagined, that there were these invisible lines trembling in our wake, outlining our trajectories through life, throbbing with electric energy. Lines that sometimes cross one other, or follow in parallel ellipses without ever touching, or meet up for one brief moment and then part. A universe of lines crisscrossing in the void.

Anthony Doerr's astonishing new novel "All The Light We Cannot See" follows the complex arcs of two such invisible lines through the lives of Werner Pfennig, an orphan boy in pre-World War II Germany and Marie-Laure Leblanc, a blind girl living in Paris with her father. Through riveting flash forwards and flash backs, the novel charters the course of their lives as they struggle to find out wether it is possible to really own your life when it is swallowed by the black holes of history. One is driven by a deep love of science while the other is inhabited by the power of books. In the midst of the rise of German fascism and the birth of the French Resistance, how does youth manage to stay true to its essence?

A war story, a coming-of-age story, a philosophical fable, this is a novel that constantly oscillates between the moral uncertainties of life and the chiselled precision of the natural world that surrounds us. Between the political morass of war and the stupendous beauty of organisms, the ocean, the human brain.

The language is so fantastically precise - Anthony Doerr does things with verbs that make entire paragraphs sing - that the visual component of this book is quite astounding.

In the end, what this novel illuminates is the miraculous impact that seminal events have on the rest of our lives, whether it be the magic of radio broadcasts on the mysteries of science or the extraordinary adventures of Jules Verne's "Twenty Thousand Leagues Under The Sea".

A deeply moving and enthralling work that echoes the power of early impressions on the building of a self, such as the philosopher Simon Critchley recently evoked so beautifully in a stunning essay published in The New York Times entitled "The Dangers of Certainty":


Diane S. rated it 5 of 5 stars
For me, this was a very special read. I feel like I have been on a long gut-wrenching journey, and in a way I have, traveling with two young children, one in Berlin and one in Paris and follow them as they grow-up. There are poignant moments, downright sad moments, moments that made me smile and moments that made me so very angry. Werner in Berlin is a curious child, a child with the talent for putting things together, like radios, he and his sister Jutta live in an orphanage. Marie-Laure, a blind girl and her father live in Paris, her father is the keeper of the keys for a prestigious museum. It is the radio that will connect these two lives long before they actually meet.

The descriptions are wonderful, very detailed as they are made for a blind girl, to enable her to envision the many things described. The novel travels, back and forth, times when they were young, times when they are a bit older and Marie-Laure finds herself and her father in St, Malo at the home her eccentric uncle, who is another amazing character Werner finds himself chosen for a school, and we travel along with him as we learn the many young men in the Nazi party were trained to be cold blooded killers.

How far would you go along with the prevailing threats and times, how would you react when confronted with an injustice? One young man pays heavily for his supposed weakness of character. How long can one pretend everything is fine, trying to keep eyes closed so one cannot see?

So it is radios, little built towns and houses, built by Marie-Laure's father so she can get around wherever she lives. It is keys, the French resistance, the United States Air Force bombing of St. Malo, of imprisonments and yes love. Moral questions and a great character study.

It even follows a few characters after the war in Berlin, which is where this quote comes in, "Does any goodness linger in this last derelict stronghold? A little." The story than picks ups twennty years later. I read this as slow as I could, I really did not want it to end.
Posted by thesaurusbookstore at 8:04 PM No comments:

Young adult refers to the age of the characters…not simplistic or immature writing.

Young adult novels can be defined as books that are marketed towards late teens and contain main characters between the ages of 12 and 18, sometimes reaching to early 20s. What young adult literature is not is a story that leaps straight into adulthood. The majority of the stories take place during the characters’ teen years. Also, a common misconception about young adult novels is that, because they are meant for teens, the stories must be immature and the writing poor. One only need look at authors such as John Green, Hannah Moskowitz and Maggie Stiefvater to see that those claims are false.
Along with the popularity of young adult literature have come the critics who want to pick it apart and dub what should and shouldn’t be featured in books aimed at a younger audience.

Young adult literature is often written from the first person point of view, an aspect that seems to be especially appealing to the young reader. It gives them a look into the mind of a character that is near their age and allows them to make a better connection and be therefore more invested in the story. Young adult literature often lets us in so we can experience all those teen emotions and insecurities along with the character. For young readers, they find a friend of sorts, while older readers are able to reminisce about their teen years.
Along with the narration goes the voice. Young adult novels should have characters that are using slang and often talking in fragments. The stories tend to be dialogue heavy, frequently informing the reader about a character’s temperament whether it is through sarcasm, wit or intellect.
Another common aspect of young adult literature is quick pacing. Most of the novels are plot driven with cliffhanger chapter endings and more action than sprawling description. The current blockbuster-movie-watching and video-game-playing generation need stories that move along at a good pace and ultimately sustain their interest.

Some of the most common themes in young adult novels are about coming of age, self-discovery and first love. They often also touch on typical teen aspects of being quick to love or hate someone or to have emotions that run rampant. Insecurities relating to body image and popularity are written in, as well as immature behaviour and a tendency towards the over-dramatization of events.
Another common theme is the absent parent.

What is the appeal of a young adult novel that lures in a reader? Often the main characters are given a power of sorts over their situations, something teens may feel is lacking in their own lives, whether it’s the power to make their own decisions or love whomever they want. These novels put their characters into circumstances that a young reader can sympathize with and commiserate over. Even if the setting is fantastical and the characters are those with super powers, they are still going through some of those themes mentioned above–themes the reader relates to. While it’s important for teens to understand the difference between fact and fiction, they can be comforted by seeing a character go through the same kinds of situations and troubles that they are experiencing in their own lives.

There is a lot a debate currently about what should and shouldn’t be allowed in a young adult novel. Many argue that the stories are too dark, too racy and too…real. There are a great many young adult novels containing drug use, date rape, physical abuse, suicide, foul language, and sexual encounters. Some complain that young adults should not be subjected to such topics because they are at an impressionable age but, realistically, these are topics and situations many of them are experiencing on a daily basis. There are certainly ways those topics can be discussed and touched upon without being explicit and raunchy, but they shouldn’t be avoided entirely; let’s face it young adult are having sex, cursing and suffering through unpleasant situations.

While young adult novels are going to feature teens and the situations they go through, they can still deal with difficult and age appropriate topics. The dialogue may come off as “young” but that doesn’t mean the writing is “dumbed” down. The stories are relatable and fast-paced, keeping the attention of a young reader. They don’t always have a happy ending and can be complex and touching.
Posted by thesaurusbookstore at 8:31 PM No comments: