Inside Room is Ma and Jack -  there is Spider somewhere and there was Mouse for a while but there is nothing else alive apart from Plant. Old Nick is alive too when he comes to take out the rubbish; bring a Sundaytreat and use his prisoner. From Wardrobe, Jack can count the times the bed springs under his weight and hear the heavy breath of a monster. He doesn't quite realise that Old Nick is a monster though, for the bravest thing Ma does throughout their incarceration is to sheild him from her abuser and create a warm, defined and secure world for her little boy. This is essential for their survival and for her own sanity as much as Jack's. Jack is now five and it is at this point that he starts to comprehend that there is a world outside of Room that isn't just in TV, a world that has aeroplanes and is real. 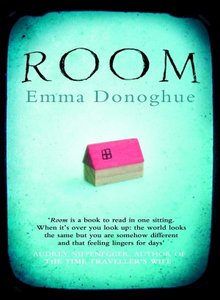 Room is a book that was a massive seller and success - most of the staff in Thesaurus have read it (go on in and ask them!); it was short-listed for the Booker Prize; became an essential bookclub book and was a critical and popular success. This is well deserved recognition in this instance, it's not the case of the spin-storm around a novel overtaking the novel itself.

About a third of the way in the voice and idea wears the reader down a little but cleverly Donoghue shifts the story up into a higher gear and once again you are sailing through the novel in the little but surprisingly astute hands of Jack. This is a character who you want to succeed, who you know will and your heart will break at just how scrave he and his Ma end up being.
Posted by Onomatopoeia at 3:31 PM